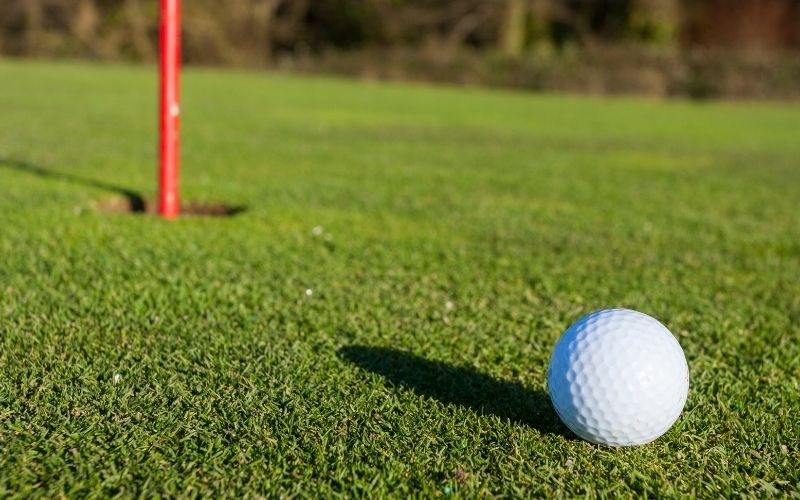 The detail behind the green details.

In my traditional “clean out the files” purge between Thanksgiving and New Year‘s, I found an old document I wrote to educate the then, new associates, the basic process for how our firm designed greens.  I share it (somewhat updated, this was written even before CAD was part of the process) for those golf nerds out there who may be interested.

While some architects claim to design greens “by feel” and “in the field” most prepare what are known as “Green Detail Plans” usually at large enough scale (1” = 40, 30, 20, or even 10 feet) to show even minor changes of grade intended very clearly.  And, while one podcast introduced me as “a dinosaur that draws plans” I still believe the basics are best figured out on plan, with only minor refinements and final flourishes to be made in the field.  Plans have been used for a thousand years to make construction more efficient, and there is no reason to change now.  However, some new generation architects have expanded the “in-field changes” to include the entire design of the green complex once they get on site.  They say you can’t figure out a green design on paper.  I agree…..at least that they can’t figure out a green design on paper, but I know I can.

There can be a middle road.  As one experienced shaper told me, “I at least need green size, its angle to and elevation above the fairway, and some idea of any specific contours.” (if none is given, he shapes to “gently rolling” which isn’t a terrible default.

I usually tell contractors in pre-bid meetings to expect that 15 of 18 greens will be built close to the green detail plan, but that they should expect me to make some pretty hefty changes on to up to 3 greens.  If I find a better idea after tree clearing and construction has begun, I am not afraid to make the change.

I don’t believe the golf course architect should have the right to – or need to – make endless changes.  And, most design contracts say the same, allowing reasonable changes subject to the owner’s approvals.  While few owners will override their golf course architects design thoughts on theory, many will stop changes if they will cause undue maintenance, or negatively impact either the schedule or budget.  The architect’s job is to design something practical and within budgets, not endlessly play in the dirt.

When I always make minor changes to the “first draft” by the bulldozer operator, I try to make subsequent changes smaller each time.  I once referred to this as the “yards, feet, inches” philosophy.  It’s one thing to find a specimen tree in a slightly different location than you expected and move a green several yards away to preserve it.  It’s an entirely different enchilada to start construction with no clear idea of what you want and then continually massage (or start over) until the right inspiration hits you.  There are budgets and schedules to meet on nearly every project, which don’t allow for unlimited time to create.  It’s easier to push a pencil than push the dirt (updated to “move a mouse rather than move the earth…..)

Green detail plans have changed over the years, but still contain much of the same information, as seen below. 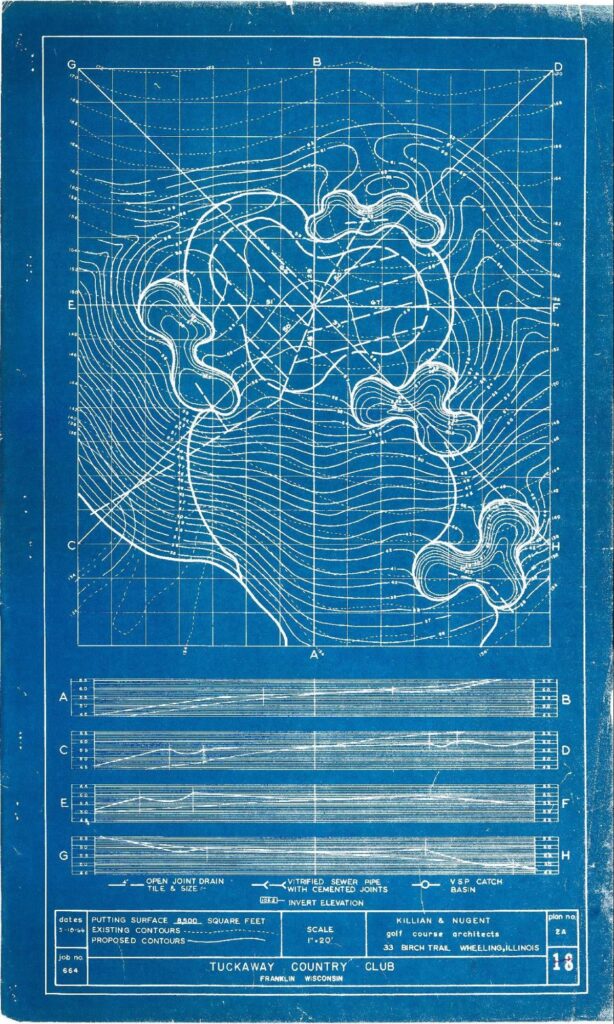 Above – When I visited Killian and Nugent as a teenager in 1970 (Age 15) this is what their green detail plans looked like – Blueprints, 20 scale (down from 10 scale earlier in their career!

Below – When I started my own firm in 1984, I continued hand drawing details until CAD became prevalent in the 1990s.  They were at smaller scale (1”=30’ feet, which can fit on 11 X 17 sheets, which are easier to carry around in the field) or occasionally 1”=40’ which can fit on 8.5 x 11” sheets for maximum convenience.  The plan below is a 1987 Plan of the first green on my first 18 hole design – Brookstone Golf and Country Club near Atlanta.   The shaded areas are steep banks, the circles are catch basins to drain the grass bunkers.  Quantities for green size, etc., and a drain tile pattern are also shown. 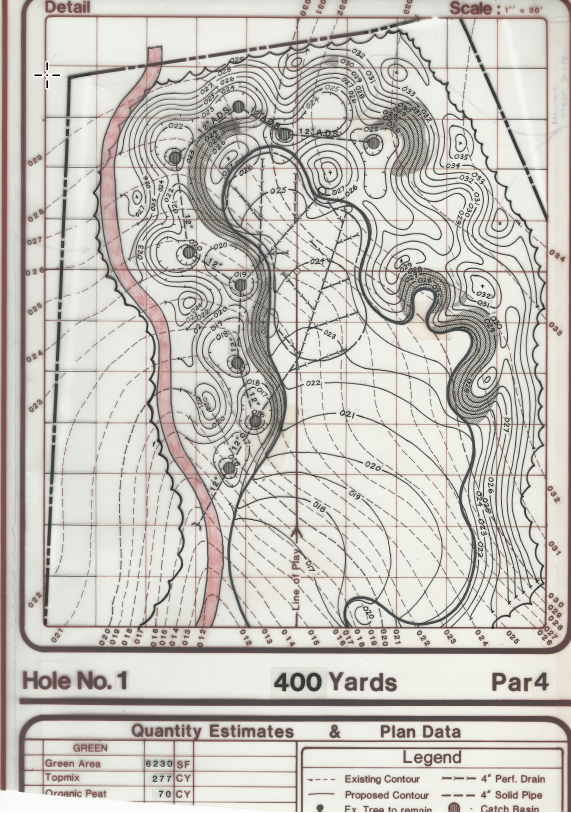 In 2018, we had been using CAD for several years, allowing more color for easy readability.  On some projects, we draw the plan over an aerial photo, which allows easy location of trees, etc. Otherwise, the information is similar.  We had taken to adding specific spot elevations at swale exit points because sometimes contractors have to interpolate between contours, and a wrong guess did result in some greens being either too steep or too flat over time. 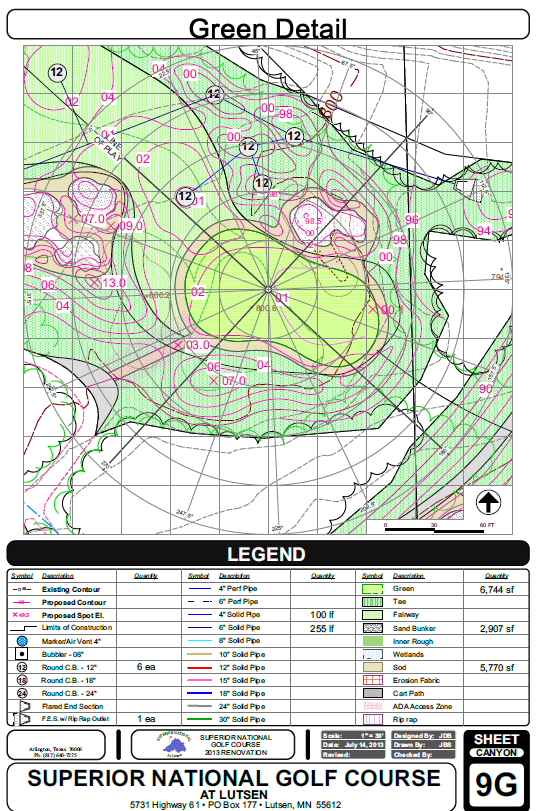 Of course, more goes into the design of a green than the average golfer knows, including consideration, going in circles as one affects the other, or hopefully, in an upward helix as we perfect the design.

When substantial changes are required, we even redraw the green plan – sometimes, depending on time, in very rough form, as below.  I tape tracing paper over the plan and draw the new alignments, elevations, etc.  One thing I notice we tend to do is not get bunkers low enough.  Rather than redrawing all the contours, I labeled the bottom elevation of the bunkers to let the contractor know just how deep I wanted them in relation to the green (4-5 feet below) and each other.  Note the three on the left “stair-step” up the hill to make each visible behind the other. 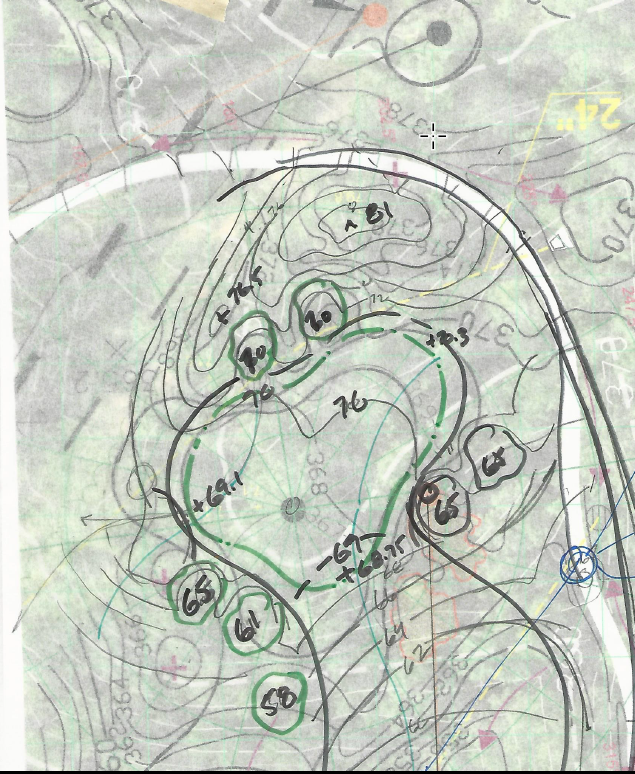